Zinc: The Massive Testosterone Booster No One Talks About!

Would you like more testosterone without drugs or expensive supplements that usually don’t work anyways? Would you like to feel full of energy, confident and have the sex drive of a frat boy? Did you know that zinc has been repeatedly proven to increase testosterone levels more than any other supplement out there? If you would like to learn about the very impressive results of zinc increasing testosterone by 100% or more, plus how much and how often to dose, then keep reading…

Zinc in the Body

In today’s marketing-obsessed business world, companies are always looking to push the “next big thing”. On the other side, consumers are always looking to purchase the “next hot product”. Fantasies of making millions on the business side and dreams of being smarter, stronger, leaner or sexier on the consumer side push both sides down an endless battle of hyping and wasting money on new products. In all the hype, consumers often forget about the basics. Here’s the haps on zinc: 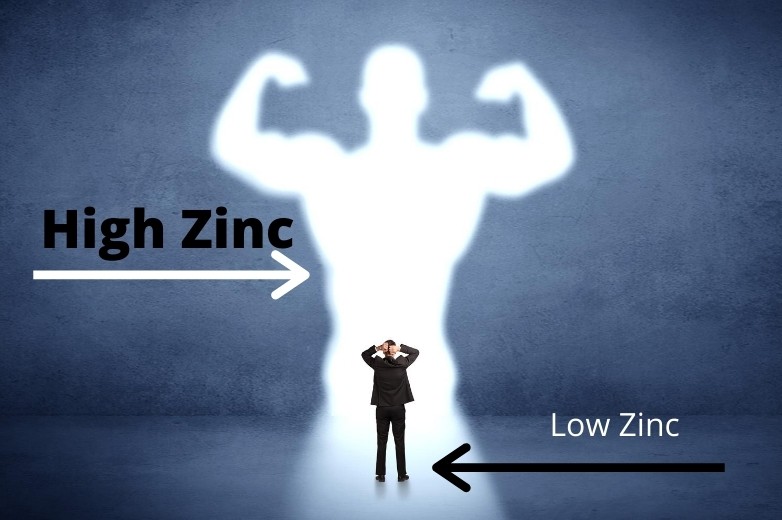 However, the focus of this article is on the hypogonadism/low testosterone effects of zinc deficiency. Let’s dig into that a bit more…

According to The Biological Basis of Zinc Physiology, zinc deficiency in humans was first observed in small populations of people eating mostly beans and unleavened bread with no good source of zinc in their diets. The male population of these groups showed extreme fatigue, dry scaly skin patches, no pubic and axillary (armpit) hair, hypogonadism (small testes), undescended testes, dwarfism, anemia, and hepatosplenomegaly (enlarged spleen and liver). The lack of stature growth seen was similar to children with hypopituitarism, or low growth hormone.

You might be saying “I don’t live on beans and unleavened bread. So, what’s this have to do with me?” Well, I’m glad you asked. Let’s take a look at zinc levels and exercise.

In a 1970 research study, Lichti et al. first showed that strenuous exercise caused a spike in blood zinc levels. This same observation was published again in 1975 by Hetland et al. and repeatedly in the 80’s. Since the zinc levels were so high in the blood post-exercise, the zinc could not have been released from cells in the blood but had to be released from muscle breakdown during intense exercise.

The elevated plasma/blood zinc also disappeared rather quickly, usually in under one day. It is thought that the zinc is quickly eliminated in the urine.  In a study of Navy military performed by Singh et al. in 1991 showed that even though the soldiers had an increase in zinc consumption from their food during the training, their zinc levels spiked after exercise and the amount of zinc in their urine increased from 400 µg per day to about 700 µg.

This would lead one to think that someone undergoing intense exercise would need to consume about 75% more zinc than normal or than by recommended by the government’s Recommended Daily Allowance– the “average daily level of intake sufficient to meet the nutrient requirements of nearly all (97%-98%) healthy people.”

None of the above takes into consideration the zinc lost through sweat, which can account for 0.50 mg to 1.0 mg per liter.

A much more recent study done in 2007 on the effects of bicycle exercise on testosterone and thyroid hormones in sedentary adult males supplemented with zinc showed some pretty interesting outcomes.

The study was small, only containing ten volunteers about nineteen years of age. Their testosterone and thyroid hormone levels were first tested at rest at the outset of the study. Then, they performed a short period of intense bicycling. Next, they were given oral zinc sulfate at 3mg per kilogram of body weight per day for four weeks. They then had their hormone levels tested again at rest and after another short period of intense bicycle exercise. The results were impressive:

Now tell me, what other supplement besides illegal and health-endangering anabolic steroids can give you results like this?

Let’s take a look at another study…

Currently, plasma or serum zinc concentration tests are given by doctors and labs to determine your body’s zinc levels. Unfortunately, these aren’t a great reflection of your body’s overall zinc levels. The blood only contains about 1% of the zinc stored in the body, and due to the body’s tight regulation of zinc in the blood, it turns out it isn’t necessarily a good measure of zinc in the body. They are mostly good at showing extreme and prolonged states of zinc deficiency or reflect high doses of zinc supplementation. If one of these tests does come back low, you likely have very low levels of zinc. However, a normal test does not mean you have good or optimal zinc levels.

There is also hair, nail and urine zinc concentration tests, but each of those present their own unique problems as well. Perhaps a useful guide in understanding zinc concentrations in the body for adults would be testosterone levels in response to zinc supplementation. It’s similar to the height-to-age test used in children to determine adequate zinc concentrations. Since testosterone and height won’t be influenced outside the normal range due to an overabundance of zinc, they can be used to test zinc levels. Give zinc supplementation, and if testosterone goes up, zinc levels were deficient. If not, they weren’t. When testosterone levels stop climbing, you know you have replenished the body’s zinc stores and can go back to a more normal RDA of zinc.

Consuming over 50mg of zinc on a daily basis can interfere with copper levels. So, make sure to supplement with some copper if you are above this dosing level. The RDA of copper is 900mcg for adults. If you are getting most of your zinc from oysters or oyster supplements, oysters already have plenty of copper to go with the zinc. Nature is pretty awesome!

Zinc is found primarily in animal meat. Sorry, vegans. You’ll have to supplement with this one. For seafood lovers, you’re in luck. Just a handful of oysters provides you with about 75mg of zinc along with copper in the most absorbable source out there. I personally try to consume a few cans of smoked oysters each week, though I do not enjoy their taste. I mix them up like a ceviche, with some hot sauce and lemon/lime juice squeezed over top.

Zinc in Food, per Serving 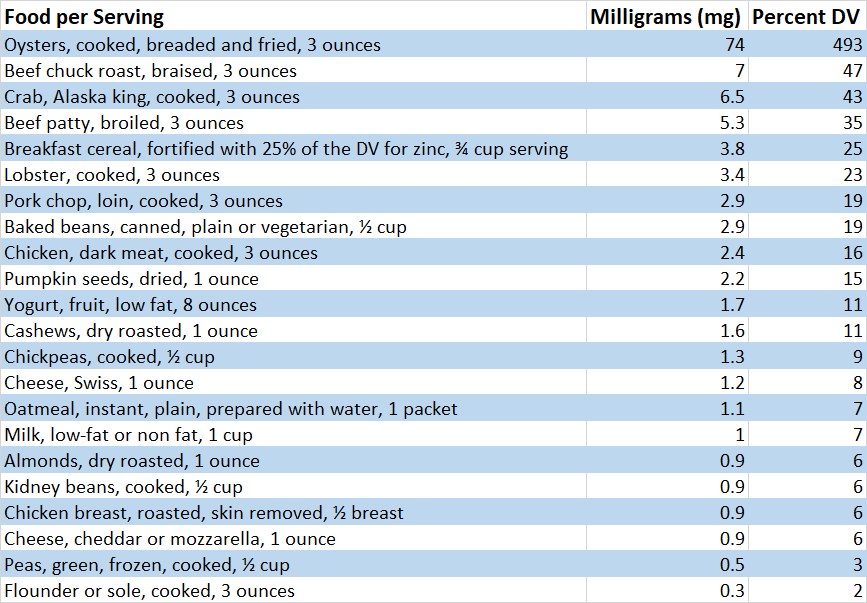 With zinc being such an inexpensive and abundant supplement, I am not sure why it has not received more attention in our modern testosterone-depleted society. The side effects are almost nil, and the price is much cheaper than your coffee. Why not give it a shot and see if your testosterone levels become optimized? Hormones have such an overwhelming effect on your mood, attitude, outlook and overall health that I would think everyone would want to give it a shot, barring any pre-existing health concerns. Just remember to get a total and free testosterone test prior to starting so you can actually measure your results and share with the world!

I will leave you with this quote from a recent zinc study:

“…the current dietary recommendations for populations who are initiating or continuing exercise intervention should be to consume dietary zinc levels, to at least the Recommended Daily Intake”